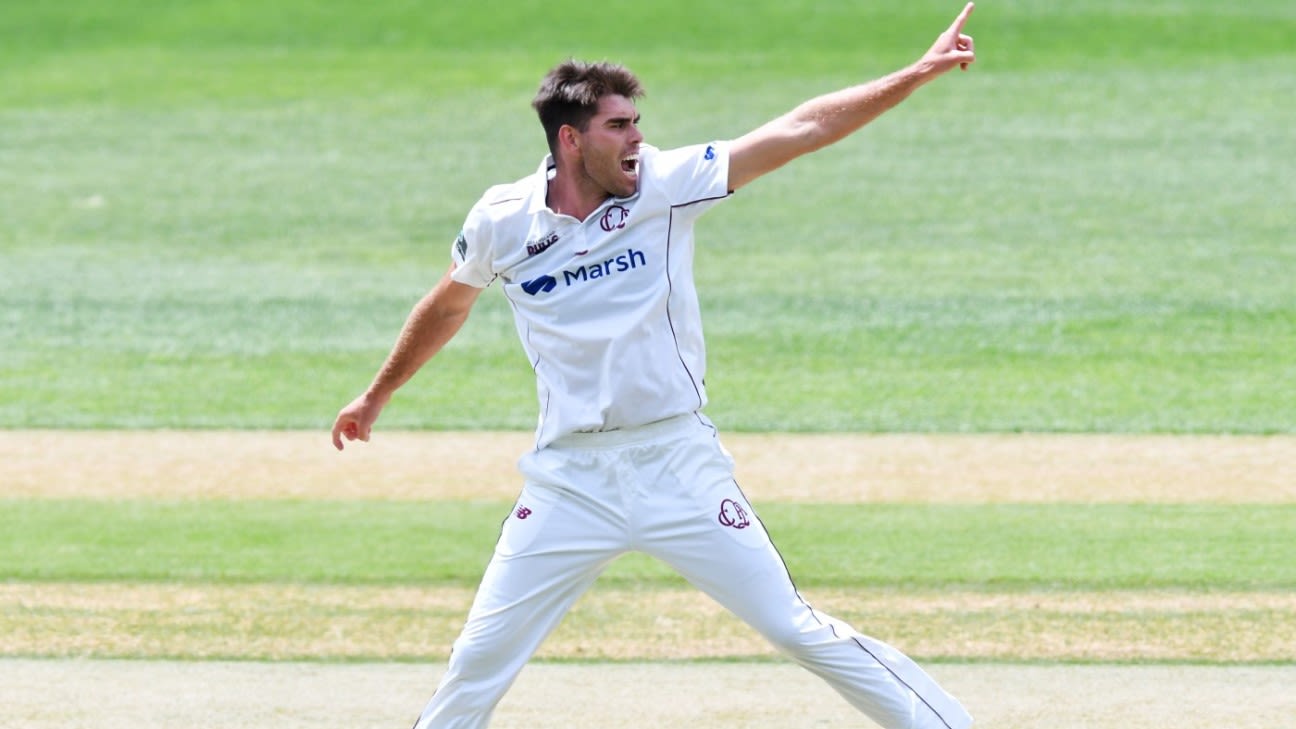 Queensland paceman Xavier Bartlett claimed three wickets earlier than South Australia launched a mini-fightback, recovering from a diabolical first session on a rain-shortened opening day of the Sheffield Shield conflict at Adelaide Oval.
The Bulls ripped by means of the highest order because the Redbacks crashed to five for 33 at lunch on day one. But Ben Manenti and Harry Nielsen dug in after the lengthy break, placing on an unbeaten 60-run stand for the seventh wicket.

Manenti is 33 not out after launching a powerful counter-attack, whereas Nielsen has confronted 101 balls for his 32 and is but to hit a boundary.

It was all of the Bulls early as seamers Bartlett and James Bazley had the hosts beneath stress for the complete first session. Bartlett was near unplayable, with figures of three for 20 overs from 12.5 overs when rain ended the day, whereas Bazley collected two scalps.

Opener Jake Weatherald was the one South Australian batter to succeed in double figures earlier than lunch, with Daniel Drew and Nathan McSweeney each out for geese.

It was the proper begin for Queensland in opener Joe Burns’ a hundredth Sheffield Shield match. The former Test participant is eighth on the Shield runs listing for Queensland, with 6646 at a median of 40.52, simply 133 behind Allan Border.

Queensland are second on the Shield ladder with two wins, a loss and a draw, whereas SA are backside after two losses and two attracts.

The Bulls made a number of modifications, with Marnus Labuschagne, Matt Renshaw, Mark Steketee, Michael Neser and captain Usman Khawaja all unavailable due to Australia and Prime Minister’s XI commitments.

Wicketkeeper Jimmy Peirson is captaining Queensland, whereas Bryce Street, Sam Heazlett and Max Bryant returned. Henry Hunt was out of the SA line-up due to his choice within the Prime Minister’s XI squad, with Jake Lehmann handed the captaincy duties.

Afghanistan one step closer to World Cup qualification after washout

“Something Regal About Him, Is Always Grounded”: Ravi Shastri On India Star | Cricket News